Against the Odds 47 - Arctic Disaster 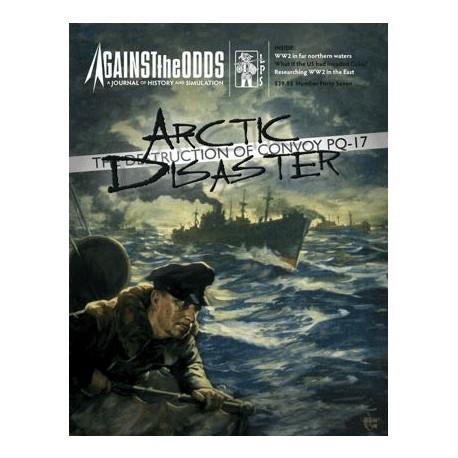 In the hardest fought Arctic convoy battle of the war, Convoy PQ-17 was largely destroyed by German air and naval forces in July 1942. Arctic Disaster, by designer Mark Stille, examines this pivotal battle and what went wrong (for both sides)!

More info about Against the Odds 47 - Arctic Disaster

The 33 merchant ships of the convoy were provided a large escort of anti-submarine ships to ward off U-boat attack, a close covering force of four heavy cruisers and three des- troyers, and a distant covering force of battleships HMS Duke of York and USS Washington, carrier HMS Victorious, and another two cruisers and 14 destroyers. Nevertheless, in spite of this protection, only nine ships reached Russia.

On their side, the Germans had assembled a large force of U-boats, torpedo-carrying aircraft and a heavy surface task force including battleship Tirpitz and heavy cruisers Admiral Scheer, Lutzow, and Hipper to crush the convoy. It was in fear of such a force that the British convoy was ordered to scatter, only to be picked off one by one by enemy aircraft and U-boats.

Re-create the voyage of PQ-17 as it transits Arctic waters en route to northern Russia. The game system is built around the uncertainty of task force activation, replicating the weak command and control evident on both sides. The Allied player is challenged to use his assets wisely to run the convoy through and exact painful losses on the Germans. The German player has to carefully weigh the possible gains in, or losses from, using his most effective (but precious) capital ships versus unreliable air and undersea weapons.

Arctic Disaster features individual counters for every ship and subma- rine, while the Luftwaffe is represented by 9-12 aircraft groups. Surface to air combat, surface combat, and anti-submarine combat is modeled with a clean system steering the players clear of an elaborate combat resolution process - permitting quick play and multiple game iterations. Detection is also handled in a manner so as not to overwhelm other game functions.

Special rules include convoy scatter and the reluctance of both sides to commit heavy ships in the area of play.

Arctic Disaster and issue #47 of ATO: