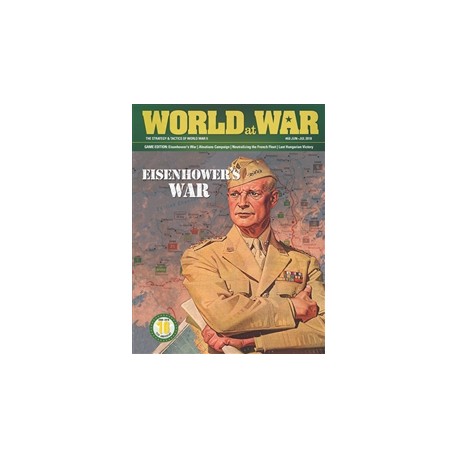 in this World at War magazine you will find historical articles and the wargame Eisenhower’s War with die cut counters.

Eisenhower's War - The General as Strategist: Victory fever gripped the entire Allied command chain following the breakout from Normandy. While everyone agreed the breakout had created a situation where the war might be won before year’s end, none could agree on how it could be realized.

Eisenhower’s War (EW) is a two-player wargame covering the final 11 months of World War II in northwest Europe, from D-Day through the end of April 1945, when the Anglo-Allied campaign in the west effectively came to its end. The game is also easily adaptable for solitaire play. The political boundaries shown on the map are those drawn by Hitler prior to his downfall. Victory is judged by measuring the player’s performances against that of their historic counterparts, with the historic outcome reckoned as a draw. If the Allied player does better than Eisenhower, he will be adjudged to have won the game. If he does worse, he’ll be reckoned to have lost the game. Each turn of play equals one or two months of ‘real’ time, depending on the time of year.