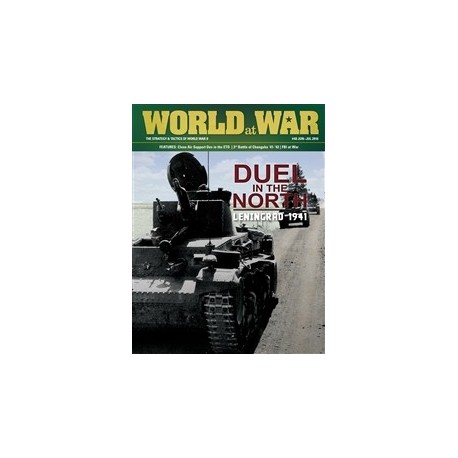 in this World at War magazine you will find historical articles and the wargame Duel in the North with die cut counters.

More info about World at War 48 - Duel in the North

Duel in the North: The Leningrad Campaign, Jun-Sep 1941. This design covers the campaign of Germany's Army Group North, from the border to Leningrad, during the first year of the war in the east. This game uses the same rules system as Sedan: The Decisive Battle for France, May 1940 (W24), Tobruk: Operation Crusader, Nov-Dec, 1941 (ST278) and Duel on the Steppe (ST285), albeit with some occasional modifications appropriate to the scale and theater portrayed.

The map area portrays the Leningrad region of the Soviet Union, encompassing about 600 miles from east to west; each hexagon is about 12.5 miles. The various game pieces represent the historic combat units, as well as all necessary chits to facilitate game play. Soviet combat units are primarily divisions, the German units are divisions and Kampfgruppen and are color-coded by nationality and command affiliation. Combat units may represent from 2,000 to 14,000 men, and 50-400 armored vehicles.