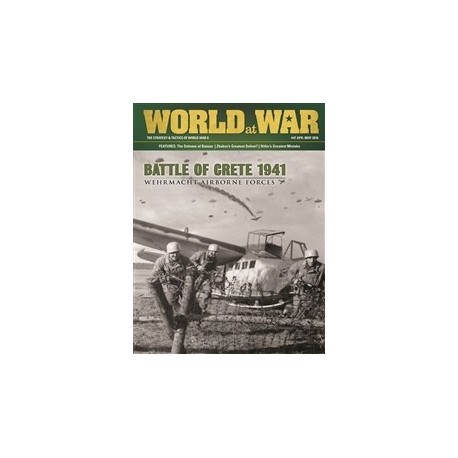 in this World at War magazine you will find historical articles and the wargame Crete 1941 with die cut counters.

Crete 1941 is an operational level wargame of the German airborne assault on the island of Crete in May 1941. This is a solitaire game; the player controls German forces (including the Italian forces) and the game system controls the opposing Allied (British Commonwealth and Greek forces) reaction. The objective of the game is for the Germans to capture Crete at the lowest possible cost in terms of casualties. You have the option to maneuver German units as you desire within the rules’ allowances. But, when a rule calls for the Allies to do something, you the player must execute that action.

There are two general types of turns in the game: Preparation and Operational. Preparation turns gives the players additional Operations Points (markers) that can be used to enhance actions, as well as refitting reduced units. In Operational turns, the player executes movement and combat with German forces. The map shows Crete and the surrounding seas, with displays representing the German staging areas in mainland Greece and each unit represents anything from a battalion to a brigade.

Battle of Crete 1941: Airborne operations came into their own during World War II. The Germans first used airborne forces in Western Europe, striking against Allied forces in France, the Low Countries, and Norway. As the war progressed, Germany orchestrated an airborne assault on the island of Crete, an action that would leave Hitler hesitant to use this strategy later in the war.