Against the Odds 44 - Vercingetorix 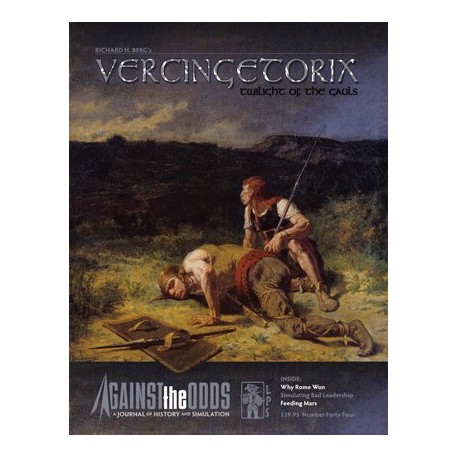 In this Against the Odds Magazine you will find historical articles and the wargame Vercingetorix with die cut counters and a plastic counter tray.

More info about Against the Odds 44 - Vercingetorix

His father's name was Celtillus, of a noble family and a chief of the Averni tribe of Gauls--a people with a remarkably sophisticated civilization and tradition as warriors and craftsmen, but fiercely resistant toward having a ruler at beyond the tribal level. Celtillus tried to assert authority to organize and ally the disparate tribes against Roman incursions, but tradition and habit were against him and he was killed by his own people.

But strife with Rome worsened, and his son elected to try again for tribal unification to survive against the two threats of voracious Rome and ambitious Julius Caesar. The son negotiated, inspired, made alliances, and finally took on the traditional title of "supreme warlord" that his father had died reaching for.

That title was "Vercingetorix," and he bore the title so well that people today think of it as his name (which we do not know).

But then, no Gaul ever bore the title again. Maybe you can change that.

ATO #44 offers Vercingetorix, a new game by designer Richard Berg, that challenges players to unify Gaul in and around the 1st Century B.C.E. From 2-4 players compete for power in all three of the main Gallic areas. The Romans and Germans are NOT active players, but introduced with random and temporary control to interfere with active player intentions.

Players draw chits each turn to improve their holdings, begin campaigns, or obtain more tribal allies. Or, they may draw surprising "Opportunity" chits that allow them to interfere with other players' turns and even launch revolts that could suppress Roman activities and elevate player esteem.

Game length varies with number of players, but most games will last 2-3 hours.

The choice is yours. Can you make the title "Vercingetorix" your own?

Bonus Pocket Battle Game Included! Also included in all copies of this issue is a second, bonus game, Surrender Unto Caesar. In a final, decisive move, Vercingetorix occupied the hilltop of Alesia accepting a Roman siege, and summoned every Gaul in the country to his rescue. Caesar in turn dug in twice, facing both inwards and outwards, supremely prepared to fight on two fronts!