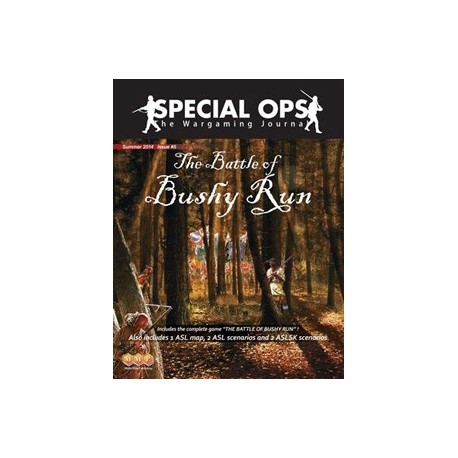 Special Ops #5 has 6 articles, 2 ASL scenarios, 2 ASLSK scenarios, an ASL map board, and the Battle of Bushy Run, a complete game.

The Battle of Bushy Run game uses a simplified version of Iwo Jima: Rage Against the Marines (in Operations Special Magazine Issue #1). The American Indian units use a concealed map and have dummy units to help hide their movement. The British force is a mix of soldiers, grenadiers, and scouts (who can reveal hidden Indian units). To increase replayability there are random events each turn (8 turns, 10 event chits, so 2 are not played each game...their identify is not revealed). Both sides have multiple ways in which they can secure victory.

In July, 1763, Fort Pitt (now Pittsburgh) was under siege as part of Pontiac’s Rebellion. A relief column was sent out from Carlisle in order to try and break the siege. The column was under the command of Colonel Henry Bouquet and consisted of approximately 500 British soldiers of the 42nd Highlanders, 77th Highlanders, and 60th Royal Americans.

On August 5th, several hundred Indian warriors of the Delaware, Shawnee, Mingo, and Huron tribes attacked the column east of Bushy Run Station. The British held out, and that night a redoubt was constructed from the supplies, and the wounded were treated inside this perimeter. The next day, the Indians attacked again, and a British counterattack broke the Indians. The British column was able to advance, and relieve Fort Pitt on August 10th.