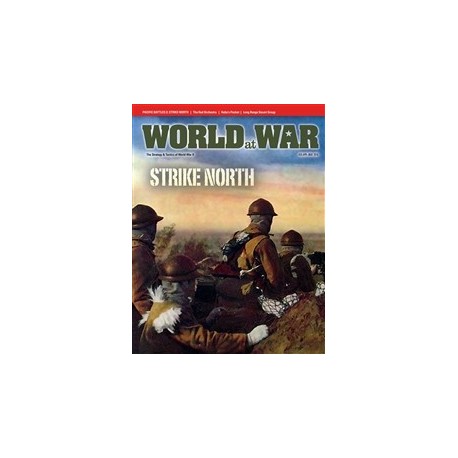 In this World at War magazine you will find historical articles and the wargame Strike North with die cut counters.

Strike North presumes that Imperial Japan has decided to invade the Soviet Union in 1941, instead of going to war with the United States. Conceptually, a Japanese invasion of the Soviet Union would be in conjunction with the German attack on the USSR (Operation Barbarossa) on 22 June, 1941. The strategic possibilities of this alternative course are incredible; The Soviets will be under the pressure of fighting a two-front war. However, by following this strategy, the Japanese would be temporarily abandoning their planned invasions of the resource regions of the East Indies and beyond, leaving Japan less than a half-year of oil to sustain their war effort.

The map shows Northeast Asia as it was in 1941, with each hex on the map equaling roughly 37 miles (60 kilometers) from side to opposite side. Each game turn represents one month of operations. The units are brigades, divisions and corps.