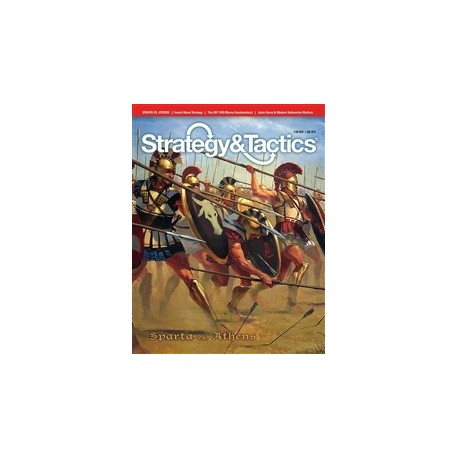 In this Strategy and Tactics magazine you will find historical articles and the wargame Sparta versus Athens with die cut counters.

Sparta versus Athens is a strategic level game of the Peloponnesian War in its entirety, spanning twenty-eight years, from 431 B.C. to 404 B.C. The map is a point-to-point map, using city-states and the common land and navigable sea routes as the conduits that defined the Grecian Mediterranean. The game is designed for simple movement and combat mechanics to resolve battles and sieges, all centered upon the predominance of famous and historic leaders (e.g., Alcibiades). The game is richly historic, and keeps players within historic parameters in such a way that alliances and politics can shift, depending on how the war is going, but only within the limits of historic possibilities. Some city-states of the Delos Confederation may ally with Athens, while others may ally with Sparta, for example. Athens vs Sparta includes four scenarios: The Archidamian War (431 - 422), The Peace of Nicias and the Sicilian Expedition (421 – 413), The Ionian War (412 – 404), and the campaign scenario covering the entire war.

The game includes one 22x34" map of the Grecian Mediterranean, including Sicily and southern Italy, and as far east as the Persian empire, 280 counters of all participants in the Peloponnesian War. Each game turn is played as four seasons of one year. Each inch equals ~18 miles. One naval strength point represents 5 galleys of the era (Triremes), and one land strength point represents 350 to 450 heavy infantry (Hoplites) or 500 to 600 light infantry or 200 to 300 cavalry.