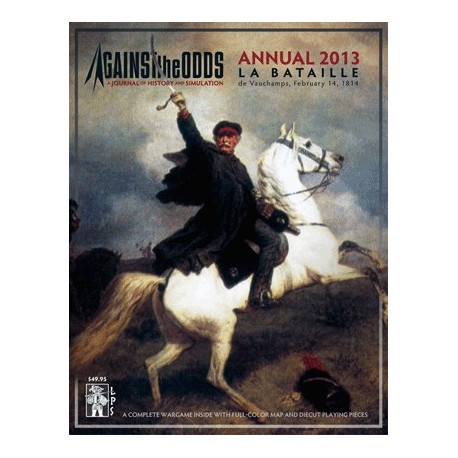 In this Against the Odds Magazine you will find historical articles and the wargame La bataille de Vauchamps with die cut counters and a plastic counter tray.

For the casual reader who looks into the “100 Days” and the Waterloo Campaign, one of the early questions is, “Who (the heck) is Grouchy?” Followed up by wondering why (on earth) Napoleon would give this guy a third of his army and depend on him to keep Blücher’s Prussians far from Wellington.

In context of Grouchy’s performance then, it’s a very reasonable question. But the answer goes back to February,1814, where - at the Battle of Vauchamps – then-Cavalry-General Grouchy showed he could be extremely good at chasing Blücher.

Vauchamps is one of those interesting battles mostly lost in the blur of “the 1814 Campaign,” where Napoleon kept giving bloody noses to the advancing allied armies but never quite had the strength for a decisive victory. Few Allied noses were as far out in front as that of Marshall Blücher. There, in a small chapter called the “Six Days Campaign,” Napoleon dealt the “Army of Silesia” defeat after defeat. Reeling from this, Blücher tried to disengage from Napoleon’s personal attention and attack an isolated corps under Marmont, with a mostly infantry force that included the names Zeiten, Pirch, and Kleist that we would see in 1815.)

But “Boney” anticipated that move and turned the tables on Blücher’s Prussians and Russians, who were advancing with little cavalry. For one time in 1814, Napoleon had more horses engaged and used them well.

The Battle of Vauchamps can be seen in three phases...Blücher advancing while Marmont falls back toward reinforcement, Marmont’s counterattack, and Blücher’s shock at discovering “the Ogre” again confronting him and falling back. Phase 3 is a long pursuit action - French cavalry hounding Allied squares (and breaking several!) Had the ground been less muddy (allowing the French horse artillery to stay closer), things would have been even worse for the Allies. As it was, in the final count, Allied losses may have been greater than 10-1 over the French, and Blücher (once again) was very nearly captured.

La Bataille de Vauchamps is the 2013 ATO Annual. Designed by the original Marshal Enterprises team of Monte Matteson, Dennis Spors and James Soto, it comes with a full color, 17" x 44" map board and close to 500 colorful, die-cut counters, plus rules, charts and everything you need. Vauchamps serves as a good intro or entry level game to the “La Bataille” system, made popular with Clash of Arms Games and with fans all over the world. Our Annual also includes a deluxe-sized magazine with even more articles and interesting stories. Learn more about this intriguing battle, and other items of military history as well.

You can get Vauchamps at a substantial discount when you order it at the same time you subscribe or re-subscribe. (And subscribers, remember you to not have to wait until your sub ends to re-subscribe.)

Also included in this issue is Shogi, an expansion game for Operation Cartwheel, which appeared in the 2008 ATO Annual (you must own Operation Cartwheel to play this) covering the little known IJN and US carrier operations in late 1943. While both sides missed each other repeatedly by only a matter of hours, they could have met and changed the course of the war. Named after the Japanese game of chess, a game in which regular opponents can learn much about each other's approach to strategy, Shogi allows players to out maneuver and out mass their opponent for the key air-sea battles.

Aviss about Against the Odds Annual 2013 - La Bataille de Vauchamps