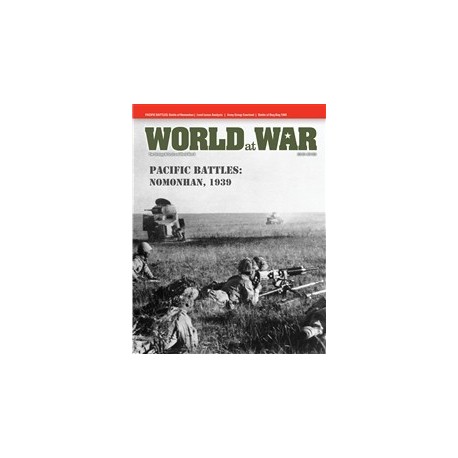 In this World at War magazine you will find historical articles and the wargame Pacific Battles : Nomonhan with die cut counters.

Pacific Battles is a wargame series of several campaigns in the Pacific Theater of operations in World War II. The system emphasizes the operational level of these campaigns, and deals with land and air operations. Nomonhan is the second game in the series (Japanese vs. Soviet), following the first game in the series, Guadalcanal (World at War issue #23); It covers the entire land-air campaign for the strategic Mongolian city of Nomonhan, May to September, 1939. The game includes 228 die-cut counters, and also includes air units, supply markers, campaign chits, suppression chits, deception markers, etc.

Land units are primarily regiments, and air units represent from 12 to 60 aircraft, depending on the quality of the air force. The colorful map features Mongolia, with each hex representing approximately two miles across, and includes such prominent locations as Kawamata Bridge and Nomonhan, as well as various charts and tables for easy reference during play.

Battle of Nomonhan / Khalkin Gol: an analysis of the 1939 mobile campaign fought between the Soviets and Japanese on the border of Mongolia.