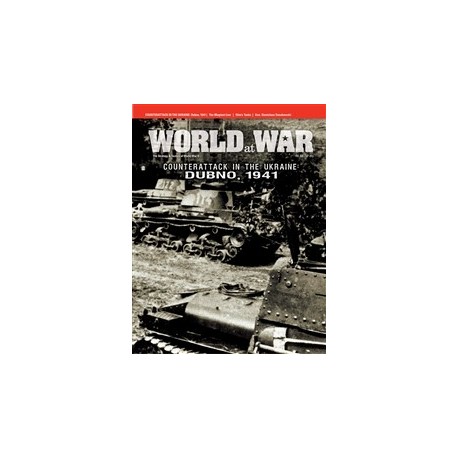 in this World at War magazine you will find historical articles and the wargame Dubno 1941 with die cut counters.

Dubno, 1941. During the opening days of Operation Barbarossa, the German First Panzer Group drove deep through the Ukraine with its ultimate objective the great city of Kiev. Leading the thrust was the 48th Panzer Corps. The Germans broke through the Soviet frontier defenses, but the Red Army quickly counterattacked with several mechanized corps. While the Germans were outnumbered, especially in tanks, they had superior command control and tactics, allowing them to defeat the Soviets piecemeal. Moreover, the Red Army at this stage of the war was in the midst of reorganization, and suffering from severe logistical shortfalls. Still, the Germans got a surprise when they ran up against T-34 and KV tanks which were far heavier than the German AFVs, and were largely impervious to their anti-tank fire, except for the infamous 88mm flak guns. Following several days of mobile battles, the Wehrmacht routed the Red Army. Yet, the Germans were delayed long enough to cost them a quick capture of Kiev, a failure which would have considerable ramifications in the next several months of the campaign.