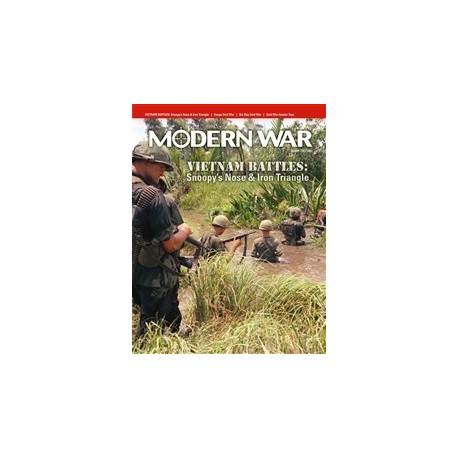 In this Modern War magazine you will find modern Warfare articles and the wargame Vietnam Battles with die cut counters.

For some time, there had been reports that a large area of dense jungle northwest of Saigon was a staging base for the Viet Cong. Ideally situated near Cambodia, a nexus point of the Ho Chi Minh Trail, and proximal to the capital city of Saigon itself, the area that became known as the “Iron Triangle” allowed the Viet Cong to conduct well-organized and well-supplied operations into the very heart of South Vietnam. In the meantime, a hundred miles to the south, a US riverine force, comprised primarily of the newly-arrived 9th Infantry Division, began to penetrate into the hinterland of the Mekong Delta, and even into the overgrown rivulets where only ‘Charlie’ had ever operated before. In the first in the Vietnam Battles series, two games are included, Iron Triangle and Snoopy’s Nose (named after a distinctive curve in one of the distributaries leading to the Mekong River). Both games utilize the very popular Fire & Movement combat system, and is easy to play.

Units in the game are typically companies and some battalions and occasional brigade equivalents. The full spectrum of the war in Vietnam in 1967 is featured with everything from riverine craft to helicopters. Each hex represents about a half mile, and each game turn represents from about a half a day to several days of operations.