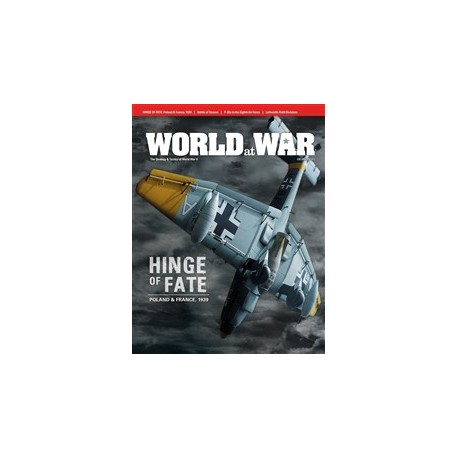 In this World at War magazine you will find historical articles and the wargame Hinge of fate with die cut counters.

More info about World at War 30 - Hinge of fate

Hinge of Fate is primarily meant to examine the strategic alternative history possibilities inherent in the campaign that could’ve occurred within Poland and the Rhineland in September 1939 if the French had resolved to keep their promise to launch a “major offensive” into Germany within a week after that nation invaded Poland. The action in that scenario is fought on two maps, East and West, and also allows for the possibility of a last-minute change of side by Stalin. It can be played by two, three or four. There is also a smaller (one map) Historical Scenario, which is played only on the East Map. It can be played by one or two. Both sides’ orders of battle are entirely historical in both scenarios. The main body of rules is written with the alternative history scenario in mind.

Each game turn represents three days. Each hex on the West Map represents eight miles from side to opposite side, while the corresponding figure on the East Map is 16 miles. Each counter typically represents an army or occasionally a corps.

Avis about World at War 30 - Hinge of fate