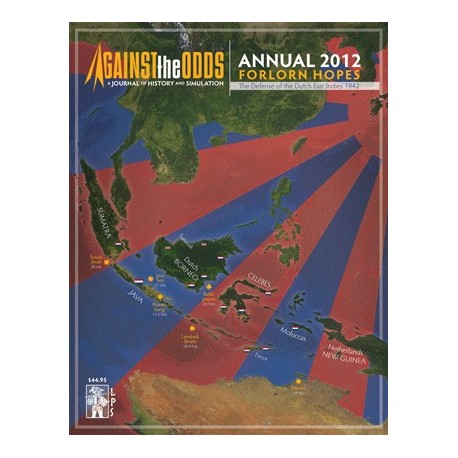 In this Against the Odds Magazine you will find historical articles and the wargame Forlorn Hopes with die cut counters and a plastic counter tray.

More info about Against the Odds - Annual 2012 - Forlorn Hopes

World War Two history has a pattern in both the European and Pacific Theaters. Constant Axis expansion, followed by steady Axis contraction, as the Allies recapture lost territory. In Europe, it is hard to pinpoint the transition point (a good barroom discussion any time!). In the Pacific, it is a little easier to focus precisely at the campaign where the Japanese tide of conquest began to ebb-- their unsuccessful campaign to take Port Moresby, the "step too far."

What then represents the "high tide" of the Japanese Empire? That would be their successful conquest of the Dutch East Indies, one of their most strategically vital targets for the oil and rubber it could provide. A broad look at the record suggest the Japanese mostly had things their own way against the hasty "ABDA" alliance (American, British, Dutch, Australian), with its varied mix of modern and obsolete weapons and widely differing priorities. But a closer look shows that this was a much closer campaign, stretching the Japanese to complete. With a few breaks, the Allies might have held on.

Can you do better? Find out for yourself.

Forlorn Hopes covers the entire two-month campaign for the region, using a system that fully integrates air/sea/land operations. Derived from the popular titles "Chennault's First Fight" and "Operation Cartwheel" (both published by ATO), this game give both sides difficult choices in facing their different challenges.

The Allies are spread thin and facing multiple routes by which the enemy can attack. They know the maxim that "those who defend everything defend nothing" but deciding what NOT to hold is difficult. You must make the Japanese pay for every gain...

The Japanese face an enemy already in control of much of the battlefield and fighting with their backs to the wall. They have a schedule crunch and must weigh to benefits of using high cost assets to gain objectives. The cost of success at too high a price is long term failure (and who will tell the Emperor?).

BOTH players can choose to increase their available forces, representing greater emphasis in overall planning. But the reinforcements come at a cost in victory points that could tip the scales to the enemy. Both sides are charged with using assets as effectively as possible. This is not an easy win for either side.

Forlorn Hopes, the 2012 Annual, delivers the extra size and contents you expect from ATO. Full color 22" x 34" map. 288 die-cut, full color large 5/8" counters provide players with the air, ground, and naval units which actually fought in the campaign, plus some which could have been there.

Bonus Item: After war broke out in 1939, throughout the remainder of the year the most pressing problem for the Allied navies was to hunt down and destroy the German surface raider, Graf Spee. This "pocket battleship" was too quick to catch by the heavy ships, and too powerful to engage by lighter forces alone...an enclosed mini-game with this issue shows how it was done.

Avis about Against the Odds - Annual 2012 - Forlorn Hopes