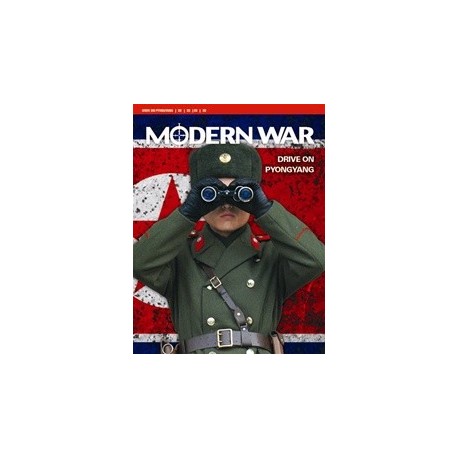 In this Modern War magazine you will find modern Warfare articles and the wargame Drive on Pyongyang with die cut counters.

Drive on Pyongyang, designed by Ty Bomba and Joseph Miranda, is an updated "what-if" simulation of the fighting that might occur on the Korean peninsula if the US-led anti-terrorism Coalition launches a ground war to finally settle with the Pyongyang regime.

The game is a two-player wargame of low-to-intermediate complexity that postulates this might-be war lasting about a month. We believe that's about the maximum time before the Coalition ground force's diminishing supplies, coupled with a loss of the domestic political will necessary to continue the fighting, would bring about a settlement if victory were not achieved in the field.

The game includes one map of North Korea, from shore to shore (as well as the northern region of South Korea), and two counter sheets (560 counters) of game pieces representing all of the contemporary US, Allied (South Korean) and North Korean forces that would be engaged in a US preemptory conflict in the near future.