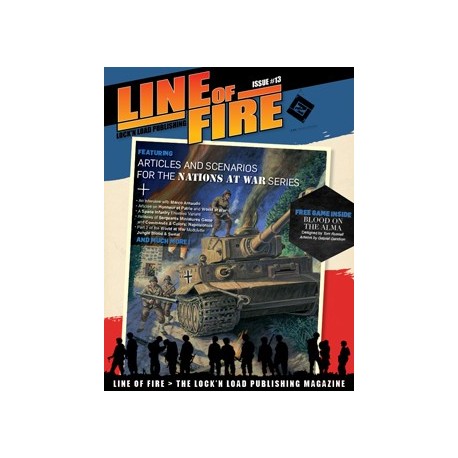 More info about Line of Fire 13

Forget about the number 13 being unlucky:  be one of the lucky readers of the latest issue of Lock ‘n Load Publishing’s dynamic magazine, Line of Fire. This issue is another bountiful offering of our Charles S. Roberts Award-nominated magazine. At the vanguard of this magazine is the Nations at War series of games. Included are articles on the future of the series, on the forthcoming Stalin’s Triumph, and on strategies for the campaign in Operation Cobra, plus four new scenarios by veteran designer Matt Lohse: two on Operation Market Garden and two on Operation Goodwood.

And if all of that isn’t enough, how about a Free game! Blood on the Alma, designed by Tom Russell, with art by Gabriel Gendron, depicts the September 20th, 1854, Battle of the Alma, in Crimea, in which an Allied force of British, French and Turks met the Russians. The game includes rules, a color map, 123 beautiful 5/8” die-cut counters and a player-aid card. Its unusual mechanics and atypical sequence of play make Blood on the Alma a singular gaming experience.  Click here to download the rules from DropBox.

But that’s not all. Also featured are articles on the French in Honneur et Patrie, on larger battles in World at War, Warparty fiction, an exclusive interview with maverick game reviewer Marco Arnaudo, a unique Heroes of the Gap battle report, and reviews of Sergeants Miniatures Game, Martian Dice and Commands & Colors: Napoleonics.

If new scenarios get you excited, then you’ve come to the right place. In addition to the four Nations at War scenarios, there are plenty more:

Avis about Line of Fire 13