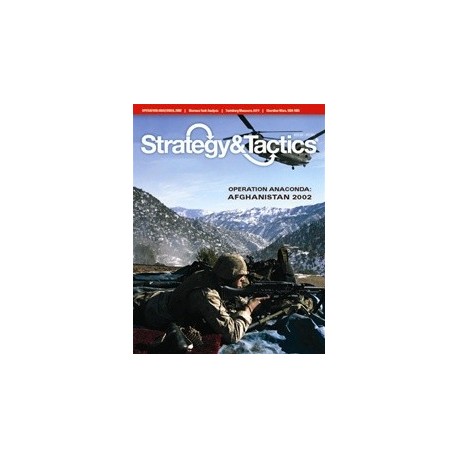 In this Strategy and Tactics magazine you will find historical articles and the wargame Opération Anaconda with die cut counters.

Operation Anaconda, designed by Joseph Miranda, is an intermediate-complexity, grand-tactical game covering that codenamed battle fought between US/Coalition forces and Al Qaeda in eastern Afghanistan in March 2002. It featured a combined US-Afghan-Coalition force attempting to surround and destroy enemy units while also capturing or killing Bin Laden. The operation ultimately failed in its larger objectives owing to poor command control. While technically and tactically a Coalition victory, the fighting demonstrated the strengths and weaknesses that have characterized both sides ever since.

The design uses the well-liked “Boots” system, which makes command-control the central feature of play. Each player commands a force composed of one or more “sub-commands.” Those sub-commands are moved and fought according to the random pick of “Command Chits.” When a particular chit is picked, its corresponding sub-command is “activated.” Since players don’t know the order in which the chits will be picked, play becomes chaotic as they strive to create and exploit opportunities.

This is a two-player game, with one commanding Coalition forces and the other those of Al Qaeda. Combat is quasi-tactical: units fire at enemy targets at range. Additionally, the Coalition player has access to various types of fire support, such as airstrikes; however, that support (as well as reinforcement) become available at random. The Al Qaeda player has the advantage of his units being deployed face down, and his opponent must use ISR (Intelligence-Surveillance-Reconnaissance) to reveal them. Play is a tense contest between asymmetric forces.

The ancient armies of Macedonia and Persia are yours to command in Pocket Battles: Macedonians vs. Persians , a tile-based war game. You'll fight on three fronts with armies you create for each battle, making every battle a new experience.