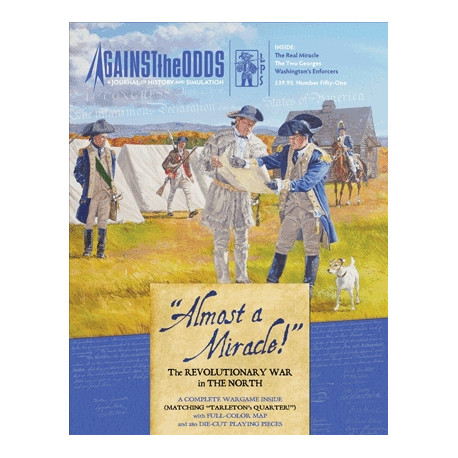 More info about Against the Odds 51 - Almost a Miracle

Description from the publisher :

When asked about it, years after it ended, George Washington said that the American victory was "little short of a standing miracle."

"Almost a Miracle!" uses our successful "Tarleton's Quarter!" as a game engine starting point to bring the Northern "half" of the American Revolution into play.

Will the British be able to impose "the King's Peace" on the northern colonies or will the revolution survive to birth a new nation?

Designer David Jones forces both sides to deal with their own challenges. The British consistently failed to "live off the land" and had to buy or ship food to sustain their armies, while the Continentals struggled with purchasing power and transportation.

The game handles battles in both large and small scale, as both were critical to the War's outcome, with a system that models 18th Century combat and how it differed from later times, where morale, readiness, leadership, and mere chance all could be "the" critical factor at one time or another, and disease and desertion could be an army's biggest killer.

Special rules cover the short enlistments of the Continentals, the uncertainty of French support and entry, prisoner exchanges, and the variable support of Loyalists and Native Americans.

Both sides faced challenges they did not expect, and both sides contributed nearly as much to their own failures as they achieved in victory.

The game will provide insights into how narrowly the Americans succeeded and how close the British came to their own victory.

Bonus Extra! Buy this issue from us directly and get a set of the Designer's Notes for "Almost a Miracle!" by David Jones inside. Discover just how calibrated the game mechanics are with the events of real history.

Playing time - Up to 8 hours

How challenging is it solitaire? - Average