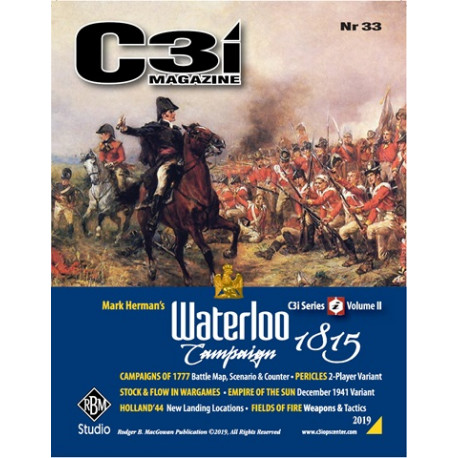 In each C3i Issue, you will find articles, scenarios and contents for the GMT games.

The Waterloo Campaign (15 June – 8 July 1815) was fought between the French Army of the North and two Seventh Coalition armies, an Anglo-allied army and a Prussian army. Initially the French army was commanded by Napoleon Bonaparte, but he left for Paris after the French defeat at the Battle of Waterloo. Command then rested on Marshals Soult and Grouchy, who were in turn replaced by Marshal Davout, who took command at the request of the French Provisional Government. The Anglo-allied army was commanded by the Duke of Wellington and the Prussian army by Prince Blücher.

The Waterloo Campaign 1815 is the second installment in the C3i Series.

A short description of what each article in this issue covers

• Propaganda Round, Nr 3: Stock and Flow in Wargames by Volko Ruhnke: Volko Ruhnke, creator of the COIN Series of boardgames, dives deep into the history of supplies and how they have been gamed throughout the history of the hobby. From Afrika Korps to his newest COIN game, Nevsky, Volko explores the importance of supply, what the balance and mechanics mean for each game, and how the designer approaches the concept.

• Infantry Weapons and Tactics: Behind Fields of Fire by Ben Hull: “Although the focus of Fields of Fire is on the rifle company, players will quickly notice that the repertoire of the company extends beyond the rifle. The following is a brief discussion of the “tools of the trade” available to company commanders, and their history.”

• Clio's Corner #10: Distilling History to its Essence, or How to Make Wargame Moonshine by Mark Herman: "So, for this tenth column I want to explore how I integrate and distill history into a game yet still be authentic to the facts? Said another way, how much history does an historical wargame require for it to be an historical wargame?" Take a walk with Mark and let's muse for a moment about what makes a wargame, a wargame.

• Daddy, you say you don't like war, so why do you play these games? by VPJ Arponen: "Much like movies and books, or any other form of art, table top games handle a range of topics from abstract, fun and entertaining, to the controversial. Periodically not only wargaming, but also lighter “euro-game” fare, might become the subject of heated discussion about why a particular theme may or may not merit a game. Why do we pick the topics we play games about?"

• Clio’s Corner #9: Take Me To Your Leader or “Where’s the ‘Bot?” by Mark Herman: “The first challenge is how to assimilate players of varying skill and historical knowledge into a new system, beyond learning the mechanics. I find that a ‘Bot can act as a surrogate strategy advisor on that all important first turn, when you have no idea what to do next… I thought it was time to talk about solitaire systems from a design point of view. I will approach this topic from my own personal journey and how my thinking has evolved on this topic over time with some of my key findings in what is loosely call 'My Beginner’s Guide to ‘Bot Design,' with myself in the role of the beginner."

• Thoughts, Designer's Notes and New Scenario for Campaigns of 1777 by Harold Buchanan: "On December 9, 1777, France received the news of the British surrender at Saratoga. French Under–Secretary of State to the Comte de Vergennes was quoted as telling Benjamin Franklin that Louis XVI was 'determined to acknowledge American independence and make a treaty.' News of the bilateral Treaty of Alliance between the French and the American Patriots reached London on March 14, 1778. It was the Battle of Saratoga that represented a major turning point of the American War of Independence, giving confidence to the French to assist the fledgling Americans in their search for self-governance. But why did the Battle of Saratoga turn the way it did? Campaigns of 1777 seeks to answer that question." Includes a new counter for playing this game, published by Decision Games.

• Solitaire Play Method: Campaigns of 1777 by Joel Toppen: "PDD, or Player Deficit Disorder is a common wargamer malaise. You know the feeling! Brand new game arrives. It looks amazing on the table! But then comes the challenge of finding another player. Well, I can’t help you find an opponent, but I might be able to provide you with a means by which Campaigns of 1777 might be a more enjoyable solitaire experience."

• Churchill Variant by Jon Zeigler and Bernard Roessler: Henry Wallace served as Vice President of the United States for FDR up until 1944 when Truman took over. Truman would go on to succeed FDR and close out the end of WW2. But what if FDR had passed on earlier? This card, only available in this issue, gives you a glimpse into what might have been.

• Polemos Variant--Pericles by Mark Herman and Herr Dr.: "Polemos is the Greek word for 'War' and this two-player variant morphs Pericles into a two-player struggle; primarily, a strategic military game meant for head to head competitive play. This variant uses the core rules with the following major modifications to the Assembly and Political phases of the fourplayer design. The players will instead focus their efforts on the Theater phase and military operations. We believe this is yet another way to learn and improve your strategy in Pericles."

• C3i Interview: José Ruiz—Stuka Joe by Steve Carey: "'Stuka Joe' is a dedicated wargamer and videographer who currently has 5,400 subscribers on his own YouTube channel. Steve Carey had the distinct pleasure to meet him during the CSW Expo 2019, and he left a lasting impression. As one of the rising luminaries in the hobby, it is our pleasure to introduce José to C3i readers."

• December 1941 Variant for Empire of the Sun by Mark Herman: "An area of continuing interest for me is the interwar period that saw the world react to the horrors of the War to End All Wars, that spawning various international attempts to outlaw war and restrict armaments that ultimately resulted in World War II. In my continuing study of the Strategic decision space that the Japanese militarists debated in their run up to the Southern offensive and their attack on Pearl Harbor, I found that there were other paths not taken." Mark introduces two new cards to add even more depth to Empire of the Sun, both exclusive to this issue.

• Issy Campaign 1815 by Frederic Bey: "This campaign scenario is specially designed for Issy 1815, 44th battle in the Jours de Gloire series that was published in C3i Magazine Nr32. It requires the 16 extra counters provided with C3i Magazine Nr33."

• Deluxe SPQR: Battle of the Po River: C3i Module by Daniel A. Fournie: Dan Fournie has been a perennial resource for adding more and more refinement and modules for the GBoH series. He returns to give an update to a game he covered all the way back in 1996. "The multitude of new unit counters now available in SPQR Deluxe has allowed for a re-design of the scenario, with more accurate, and balanced, results." Enjoy a well-researched new module, with some of his reasoning behind it all.

• Solitaire Tactics Methods for playing The Battle of the American Revolution Series Games by Joel Toppen: In each instance where Close Combat takes place in this series, the two players must secretly decide one of eight tactics to pursue. If you're playing solitaire, some of these tactics won't make sense, so Joel has come up with a way to make it all make sense. Makes sense?

• C3i Interview: Ted Raicer by Sam Sheikh: If you're here, you probably know Ted Raicer as the designer of numerous great titles over the decades. Sam and Ted talk about some of his most recent games, his design philosophy, his biggest accomplishments, and a look back at some of his favorites as well as his next title, the Deadly Woods.

• In Memory of Richard H. Berg, by Mark Herman: Richard Berg, designer of countless wargames going back into the 1970s, passed away in 2019. Bold, brash and a wonderful man, we remember him and thank him for the years he dedicated to the hobby. Mark Herman, one of his closest friends, gives us a glimpse into who Richard was and always will be.

• Unconditional Surrender! Weather Limitations by Sal Vasta: "The weather effects in Unconditional Surrender have a large impact on combat results. Because of this, a campaign game’s play balance may be seriously affected if the same weather, especially Fair, occurs many turns in a row. The following new rule mitigates that possibility."

• In Memory of Chad Jensen by Rodger MacGowan: Chad Jensen, beloved designer of the Combat Commander Series also passed away in 2019. Rodger reflects on the first time he met him and all the times they worked together since. As long as a designer's games are being played, he is not forgotten.