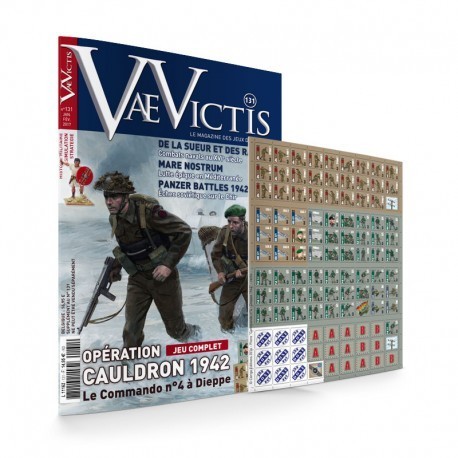 At daybreak on 19 August 1942, the Allied ships and landing crafts approach Dieppe ; Operation Jubilee has begun.
A few kilometres from the port, two coastal batteries represent the armada's principal threat; one is located at Berneval and the other at Varengeville. Composed of 6 pieces of 155 mm, Varengeville will be the target of Commando 4 under the code name Hess.
Commando 4 in action : Dieppe 1942 gives you the opportunity to relive this raid – the Anglo-Canadian forces' one and only success on this disastrous day.
This game is an improved and enriched version of Raid sur Bruneval : 1942 (VV104).
This is a solo game in which you command the British and the game system commands the Germans. A turn represents 15 min and the game is played in 12 turns.
The distances between points on the map range from one hundred to several hundred meters.
A complete unit represents 10 men, a machine gun or artillery post and its gunners.
The Commandos include a howitzer section and some snipers.
A commando mission is only successful if all the men leave unharmed. The game includes two different captivating and immersive phases: the infiltration and destruction of the principal target followed by the exfiltration up to re-embarkation. The victory conditions reflect this double objective.
Several game elements render each game play unique:
- unforeseen events for the fleet (encounter with a German convoy, fire by a coastal battery, error in course, mechanical trouble),
- masked activation markers that reveal the number and nature of activated units (infantry, machine gun nest, barbed wire), the uncertain arrival of German reinforcements (strength, location, time).
Finally, the optional rules permit the player to progressively increase the difficulty for the British. These elements all contribute to multiple times playing the game and allow the player to begin a new game quickly.
This game is the first in the solo player series “Raid” which will be based on actions prepared and executed in the style of commandos.