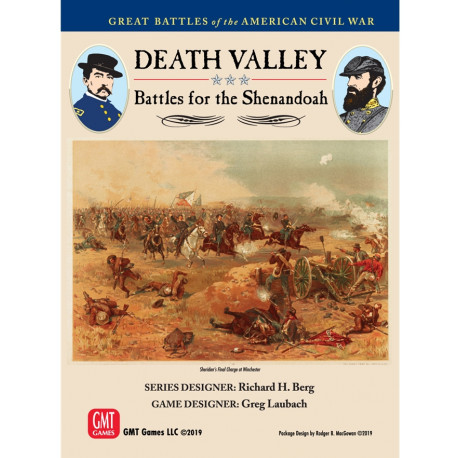 Twin Peaks is the seventh installment in the Great Battles of the American Civil War (GBACW) series, published by GMT Games. Two full battles are included.

More info about Death Valley: Battles for the Shenandoah - used

September 14th, 1862.  After the CSA success at Second Bull Run Gen. Robert E. Lee believed the demoralized USA armies could not respond to any bold action.  Thusly, he planned a campaign to raid Maryland and Pennsylvania and to threaten Washington D.C. itself.  Once again Lee confidently divided his army to both move north and neutralize the large Union garrison at Harper’s Ferry.

However, the Union Army under Gen. George B. McClellan was quick to recover from the Bull Run defeat and was already in pursuit of Lee.  The gods of war smiled on the Union troops as a copy of Lee’s orders fell into Union hands.  An attack through the lightly held gaps at South Mountain would cut Lee’s army in two and perhaps end the war.  At 6:00 am the Union Army moved.

The Great Battles of the American Civil War Series:

This series is one of the hobby’s longest lived design concepts, springing from the legendary regimental level Gettysburg game -Terrible Swift Sword (SPI)- designed by Richard Berg in 1976.  Under GMT, the rules system has remained stable but has shown remarkable flexibility to allow each game to smoothly incorporate additional rules to reflect the historical battles.  The series relies on interactive chit-pull mechanics to simulate the oftentimes chaotic nature of the 19th Century battlefield at the regimental level.

Twin Peaks contains two battle games each with its own full size map.  Experienced players will be able to play either in one sitting.  Both battles highlight the effects of fatigue from the late summer heat and the difficult terrain.  The optional fatigue rules are mandatory in both battles.  The Cedar Mountain battle also includes optional units which could have joined the battle.