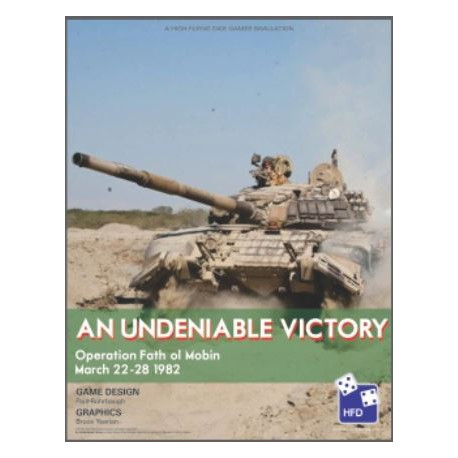 An Undeniable Victory is a simulation of Iran’s first large-scale offensive in its war against Iraq.

The previous year Iraqi forces had captured large swaths of Iranian territory. With the front line dangerously close to Khorramshahr, the Mullahs in Tehran ordered the Iranian military to launch an offensive at the earliest opportunity to eliminate the threat to this vital Iranian city and production center.

An earlier, smaller Iranian offensive, Operation Hoveyzeh, was easily repulsed by the Iraqis in January. As evidence grew of another Iranian attack, the Iraqis entrenched and awaited their enemy’s actions. Any further offensives by the Iraqis were out of the question until the severe losses in men and material from the previous year could be replaced.

The Iranian offensive in March would be supported by three divisions of the newly created Pasdaran, or revolutionary guards. Composed of youthful recruits, many of them not even out of high school, the Pasdaran was created by the mullahs as a “revolutionary counterweight” to the Iranian military, which the religious leaders suspected of harboring many who were still loyal to the ousted Shah. Much would be at stake at this battle, both at the front and behind the lines.

An Undeniable Victory is a two player game intended to be an easy-to-learn game suitable for new gamers, as well as a challenging and fun contest for veteran Grognards. The game can also be easily played solitaire, however.