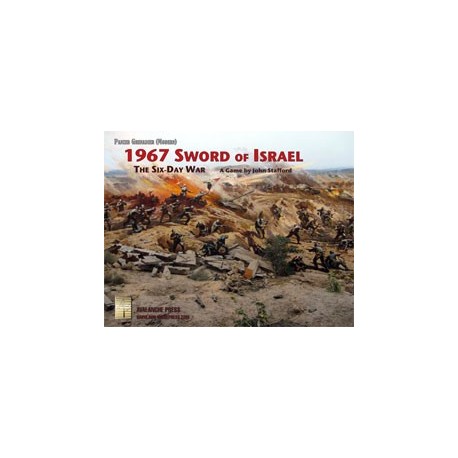 the 6 day war between israelis and arabs neighbours with the Panzer Grenadier system.

In June 1967, Israeli forces struck first against the Egyptian, Syrian and Jordanian forces massing on their borders for a final invasion of the Jewish state. For six days, battle raged along all fronts with the Israelis inflicting massive defeats on their Arab foes before the United Nations brokered a cease-fire agreement.

1967: Sword of Israel is a military history board game based on the battles of the 1967 Six-Day War, in which Israel held off and then defeated the combined armies of Egypt, Syria, Jordan and the Palestine Liberation Organization. There are fifty scenarios, portraying each of the important battles that took place in this war that set the course of modern history.

The game system is based on the very popular Panzer Grenadier system, and will be instantly familiar to anyone who’s played any of the games in that series. Units represent platoons of tanks and infantry, batteries of artillery and anti-tank or anti-aircraft guns, and flights of three to five helicopters or aircraft. Designer John Stafford has provided fifty scenarios from the Six Day War. There are eight new maps by Guy Riessen, and 909 playing pieces.

Play aids are full-color, with units and leaders on the ultra-thick laser-cut pieces first seen in Western Desert Force.