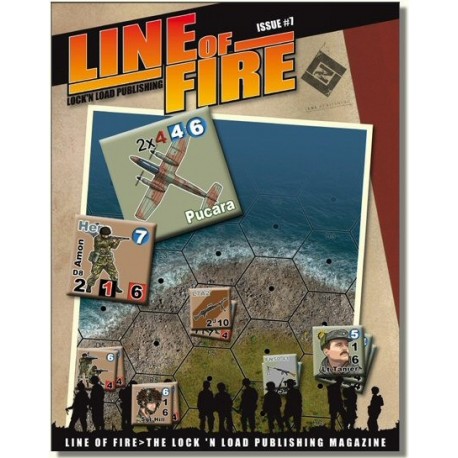 Included in Line of Fire #7 are five new World at War scenarios, two of which complete Arrigo Velicogna’s three-part serial WaW modulette, Munich’s Highway; plus two Mark Walker-designed scenarios that take place on a new, and included, 8.5” x 11” Bremerhaven City Map; and in “Counterpunch” by Ralph Ferrari, US REFORGER units and British reserves take on emboldened Soviet Formations west of the Rhine. (Note: the WaW scenarios use counters from all three WaW modules.)

For the die-hard LnL fan, there are two scenarios depicting action from Operation Torch in Morocco in 1942, both played on a new, and included, 8.5” x 11” Desert Map. Join the Americans from the 9th Infantry Division as they get their first taste of combat against the Vichy French defending the Kasbah in Mehdia, or engage in a duel of light tanks—M5A1 Stuarts against Renault R-35s—on the road from Rabat. (Note: Both LnL scenarios use counters from Band of Heroes, Heroes of the Blitzkrieg and Noville.)