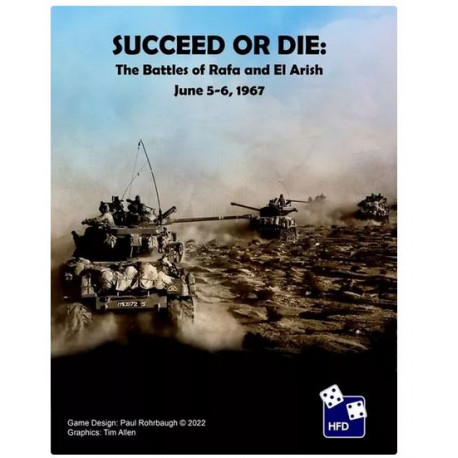 "If we are to win the war, we must win the first battle. The battle must be fought with no retreats, every objective must be taken—no matter the cost in casualties. We must succeed or die.” –General Israel Tal’s admonition to his officers before crossing the boundary into the Sinai.

Succeed or die is a low complexity level wargame simulation of the battles of Rafah and El Arish, fought in the Sinai between the Egyptian Palestinian forces and elements of General Israel Tal’s and Avraham Yoffi’s armored Ugdahs (divisions) during the Six Day War.

General Tal’s Ugdah was tasked with attacking the dug in Palestinian 7th Infantry Division in and around Rafah to secure the crucial road intersection near the Sinai/Israel border. Once secured, General Yoffi’s Ugdah would become the breakthrough force that would then drive deep into the Sinai to either take the Mitla Pass if General Sharon’s Ugdah was unable to defeat the Egyptians at Abu Ageila, or El Arish. General Tal would support General Yoffi by preventing any enemy attacks out of Gaza as well as taking El Arish if General Yoffi’s goal became the Mitla Pass. The Egyptian’s had powerful forces in the area, including their 4th Armored Division and a combined arms formation that combined outnumbered the attacking Israeli formations. The Israeli’s enjoyed total air supremacy, but numbers were against them, and it would take all of the skill, daring and luck they could muster if the Israeli’s were to succeed.

Players are cast in the roles of the local commanders on this battlefield. Both will be challenged to do as well, or better than their historical counterparts.

Each hex is about a quarter of a mile across. A turn represents four hours of time. Each unit is either a battalion (II) or company (I). 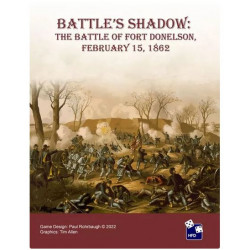 Battle’s Shadow is an historical simulation of the battle fought on February 15, 1862 at Fort Donelson.