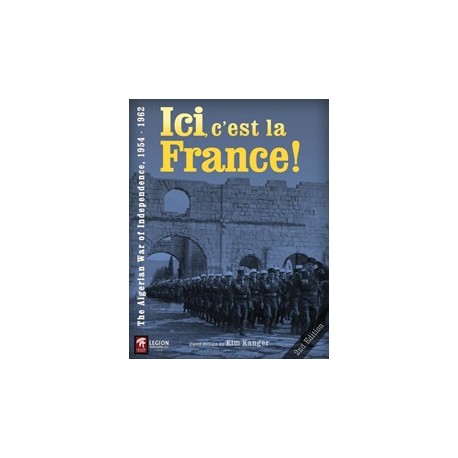 This game covers the French insurgency war against FLN in Algeria during 1954-62. It is a conflict of great drama. It cost the lives of at least half a million Algerians, it brought the tumultuous exodus of one million French settlers from Algeria and it brought France itself to the brink of civil war. But to be portrayed as a game has its difficulties, though. How do you recreate the fact that the side which lost militarily won the war? How do you make it interesting to play when FLN never succeeded in creating an army, like the Viet Minh did in the Indochina war, and therefore was never able to rival the French?

To address this, the game contains three games within the game: A political, an insurgency and a military game. Politics are driven by chits which alter four parameters: FLN structure; Algerian population; Pied noir feelings (the French settlers in Algeria) and French public/government. Each one will affect the play, in different ways, when it changes. What eventually ends the game is when the French public reaches 0 and calls for a referendum. Then you check each region whether they will vote to stay with France or become independent. If a majority votes pro-France, the French player win and vice versa. It is through different insurgency or counterinsurgency actions that you will make a region pro-FLN or pro-France. Finally, the military part will allow you to contest or control regions. This will affect your ability to mobilize, tax and conduct insurgency/counterinsurgency actions.

In other words, you will have to fight to control, conduct insurgency/counterinsurgency actions in order to win the hearts and minds of the population and, through politics, see to it that the public in France either supports you or gets fed up with the war. Some things might help you in one way but at the same time give disadvantages in other aspects. Nothing in war is purely a good decision. There is always a cost.

Each year has four gameturns. You start the game with eight random political chits of 28 possible ones. Each chit may only be played during a certain time span and after you play a chit you will draw a new one. The operation points are the main engine in the game. You will receive a certain number of points and with these points you will pay for everything you do, like recruiting or bringing in reinforcements, certain movement, fighting and conducting insurgency/counterinsurgency actions.

FLN recruitment will depend on how pro-FLN the Algerian population is and how efficient the FLN structure is. It will also depend on population density and whether they control a region or not. The French can bring in new units and replacements, but it will cost operation points and put pressure on the French public. So the reason to attack is to control/contest as much as possible and to force the opponent to spend operation points to replenish his force.

The counters have no movement points. With a gameturn of three months there is no lack of time to position units anywhere on the map. You follow the road network (as French) but it will cost you operation points when you pass regions which are controlled by the enemy. FLN moves off-road and will have some limitations to whether they may leave a region or not. The numbers represent strength and quality.

Fighting will include combat chits which in certain combination will affect the combat. My first ambition is to minimize the amount of tables in order to make the game faster to play. You roll a number of dice corresponding with your strength and modify your roll with the difference in quality. You get a hit when you roll 5-6. The complexity lies more in what to decide and when to do it.