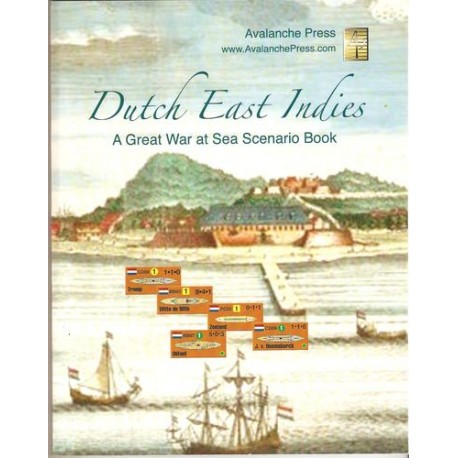 Dutch East Indies is a 64-page book supplement for the Great War at Sea series, focusing on battles which could have and in some cases did take place in and around these islands over the period 1914-1917.

For hundreds of years, the Dutch maintained dominion over a vast empire of overseas possessions. By the early 1900’s, many of these territories had been lost to Great Britain, however one of significant import remained: the East Indies, which would later become modern day Indonesia. Little Holland controlled the resources of an island empire of some 40 million people, rich in the resources – oil, rubber, tin and other metals - that would ultimately drive the industrial economies of the 20th century.

Covetous eyes watched the development of this region with interest. Japan made numerous inroads with trade missions, while more radical voices called for outright conquest, Germany expressed interest in obtaining island bases there (if not overall acquisition), while Britain stood by, intent that no other nation which could pose a threat to her interests should gain control the islands. Fears of Japanese aggression led the Dutch to consider a vastly expanded Koninklijke Marine with modern dreadnoughts to defend their prize.

Dutch East Indies is a 64-page book supplement for the Great War at Sea series, focusing on battles which could have and in some cases did take place in and around these islands over the period 1914-1917.

Conflicts between the navy the Dutch considered but never built and Japanese invaders (and others) are explored, along with historical battles and hypothetical situations arising as the principal maritime combatants of the Great War, England and Germany, struggled for control of the seas. There are 35 scenarios, or separate game situations, as well as background articles presenting the history of this Dutch territory, the politics of the Great Powers around it, and the ships that fought or might have fought there. In addition, a campaign game is provided, for those wishing to examine the challenges and surprises that would have faced Dutch and IJN planners in a 1916-1917 Japanese invasion of the East Indies.

This supplement contains no pieces or maps; ownership of Pacific Crossroads, Jutland, Cruiser Warfare and the operational maps from Strike South (from the Second World War at Sea series) is required to play the majority of the battle and operational scenarios, while Mediterranean and Dreadnoughts are needed to enjoy them all.