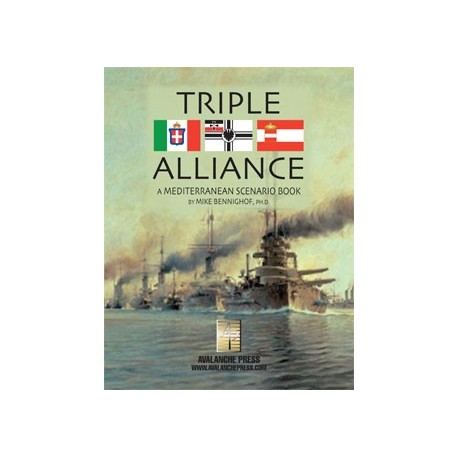 What if Italy had honored her Alliance obligations, and joined the Germans and Austrians in a naval war against Britain and France? What if the Triple Alliance plans had been put into operation, witht he Austrian and Italian fleets combining to challenge the French and British?

In December 1912, Germany, Austria-Hungary and Italy renewed their 30-year-old military pact known as the Triple Alliance. In the months that followed, staff officers from all three fleets prepared detailed plans for operations against the French and British fleets in the Mediterranean in case of war. Yet when war came in August 1914, Italy refused to join her Alliance partners and those plans would never be used.

The book includes 110 new playing pieces. There are several versions of the Austrian battleship Radetzky, both the small dreadnought and full dreadnought variations presented by her design team in 1907. The all-big-gun battleship originally proposed for the Italian Navy by designer Vittorio Cuniberti is included, along with other ships cancelled for financial reasons. And the French receive a full class of unusual battleships proposed but never built, that carry the big guns of a dreadnought but also the not-quite-as-big guns of a semi-dreadnought.

And there are some pieces to replace armored cruisers and semi-dreadnoughts from our Mediterranean game, with gunnery ratings more accurately reflecting their capabilities. Plus new seaplane pieces rated for use with the aircraft rules that began to appear in Great War at Sea games after publication of the most recent edition of Mediterranean.

The thirty scenarios study the Triple Alliance war plan in a story all their own, following the outbreak of war and the conduct of operations as the joint planning staff foresaw possible events. The scenarios follow a single story arc, but also present a study of the Triple Alliance’s strengths and weaknesses. It’s a similar approach to that in High Seas Fleet, but with its own story line.