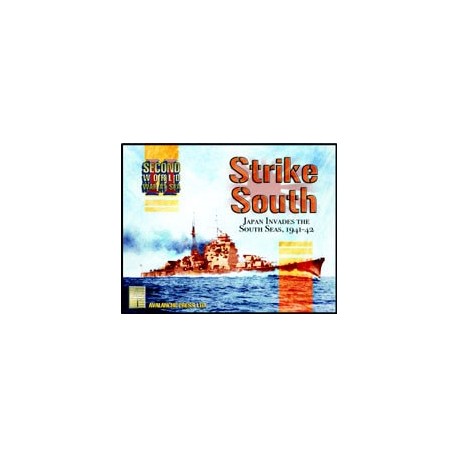 Japan embarked on the Pacific War for one reason: to seize the oil and metals of the Dutch East Indies and Malaya. In a daring five-month campaign, Japanese air, land and naval forces conquered a vast segment of the Earth’s surface from its American, British, Dutch and Australian defenders.

Strike South is a Second World War at Sea series game based on this bold Japanese aggression. There are 140 “long” playing pieces, depicting the major fleet units of both sides: battleships, aircraft carriers, cruisers and fleet destroyers. There are also 280 square playing pieces, half the size of the ship pieces, mostly depicting aircraft but also smaller warships and markers.

The two operational maps depict the South China Sea and the East Indies, including all the major ports and airbases. The area covered stretches from Formosa on the north to Australia on the South. The maps overlap with that from Eastern Fleet on the west edge, and stretch to New Guinea on the east.

The tactical map is a generic blue field of hexagons, used to resolve surface combat. There, ships maneuver and fight using their gunnery and torpedo factors. Each player rolls a number of dice according to the ship’s capabilities, hitting on a result of 6. Gunnery and torpedo damage tables give the results: ships can suffer damage to engines, hull or armament.

Strike South includes 15 scenarios, or game situations, re-creating the battles and campaigns that took place in these waters. Eight of these are “battle scenarios,” useful for learning the combat system or for a quick game of 30 minutes or less.

The other seven are operational scenarios. Players form their ships into fleets, and plot their movement across the operational map. When contact is made between fleets, play moves to the tactical map to resolve combat. The scenario instructions give each side a set of specific tasks that must be accomplished to win the game: launch amphibious invasions, escort troop convoys, bombard key enemy positions, or seek and destroy enemy fleets. These tasks are the same ones given to the admirals on the spot.

The scenarios give each player varied and difficult tasks. The Japanese player usually has more and stronger forces, but is under a very stressful timetable and has been given a very aggressive set of objectives. The Allied player faces divided command and weak forces, which must carefully strike at just the proper moment.