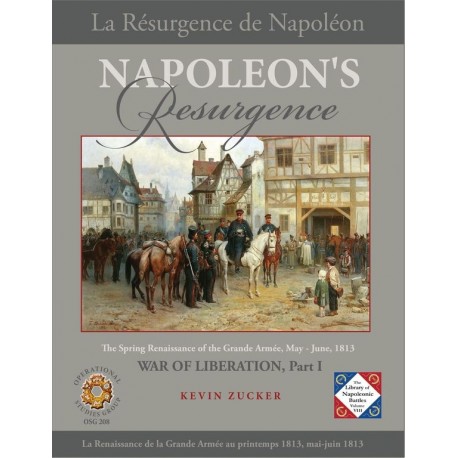 Napoleon advanced into Saxony with a fresh army of 130,000 men, conscripted and trained from scratch in just four months. The green cannon fodder lost 25,000 of their number at the Battle of Lützen on May 2nd, and 15,000 more fell out along the march from weakness, malnutrition, and disease. With additional reinforcements the army surged again to 160,000, intercepting the Coalition armies at Bautzen. French youth left on the Saxon field 12,000 men, and even more march attrition. The Russians and Prussians were losing just as many, and had not as many to lose. But Napoleon's mere 6,500 cavalry were wholly inadequate to impel his pursuits with the needed punch to damage the enemy. In hopes of building up his strength in cavalry and the other arms, Napoleon accepted a six-week truce. Late Summer negotiations, when they finally came, were not seriously engaged.

Lützen, Struggle for the four villages, 2 May
With the death of Marshal Kutusov on 28 April, there was no further obstacle to the Tsar’s fervent dream of dictating peace from the Tuilleries. The Allies marched boldly across the Elbe, not knowing Napoleon’s plans, his strength, or his location. They took up a position astride the road to Leipzig, the Emperor’s presumed objective. After a string of actions at Halle, Merseberg and Weissenfels, the two armies met on the field of battle at Lützen on the 2nd of May.

The Russo-Prussian army was nearly 100,000-strong, but Napoleon outnumbered them, and Marshal Ney was approaching with 85,000 reinforcements. Napoleon had planned to pin down his enemies and then trap them with Ney's troops. But the Bravest of the Brave ended up coming in on the flank, not far enough to oblige Wittgenstein to redeploy, and so no deadly “hinge” was formed in the enemy line. The Russians were defeated, but Napoleon’s army was at the end of its tether, and the pursuit cost him more men than the enemy. The Bautzen map is one and one half map sections: 33x34”

Bülow’s Prussian Corps of 30,000 men marched south from Berlin, threatening French Communications with Dresden. Oudinot’s XII Corps and Beaumont’s cavalry were at Hoyers- werda on the 28th of May when some of Bülow’s force stumbled upon them. By the time Oudinot caught up with them again on June 6th Bülow had concentrated most of his Corps at Luckau, driving the French back with a loss of 2,000