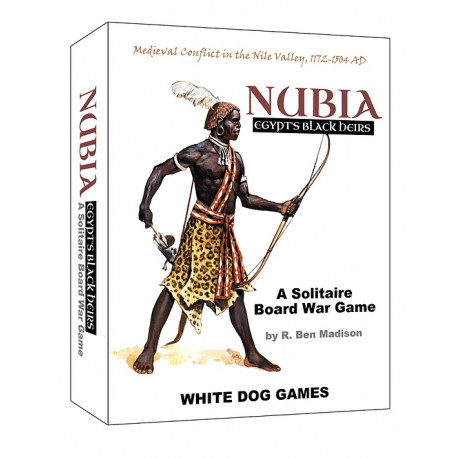 NUBIA is a solitaire strategy game based on the conflict between the christians nubians and the arab invaders.

NUBIA! The name conjures up two images: exotic and black. It has always been so. To the ancient Egyptians, who knew it as Kush, the land of Nubia was a fairy-tale world of wealthy Black kings and exotic wild animals at the south end of the Nile, a vital trading partner and a stubborn military rival. By the Middle Ages, the African kingdoms of Nubia had followed the Egyptians into Christianity, and the land of the Upper Nile (from its source down to Aswan) was ruled by an alliance of three Christian Nubian kings. The “Baqt”, a peace treaty signed as early as 641 AD, preserved an uneasy truce on the Nile. While the Arab armies of Islamic aggression invaded and conquered everything else in sight, Nubia remained an island of peace in a sea of violent jihad. But in 1171, dynastic disputes in Arab-occupied Egypt spilled over into medieval Nubia – setting the stage for its violent decline and fall (1172-1504).
NUBIA is a solitaire strategy game based on that conflict, designed by R. Ben Madison and published by White Dog Games. In the game, you play the Samet (samet) or Prime Minister of medieval Nubia, advising the Uru (ourou, King) on how best to save your Black, literate, Christian civilization from pagan plunder and Muslim defilement.