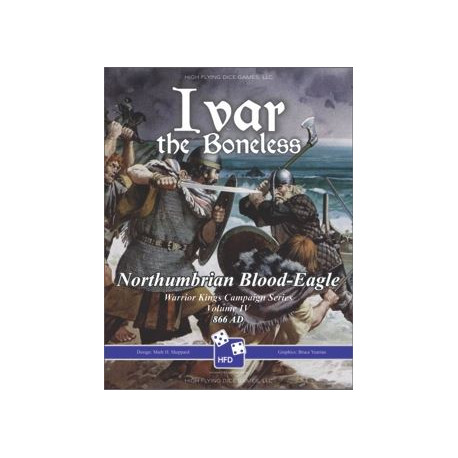 More info about Ivar the Boneless

1st of November 866AD, All Saints Day in the Northumbrian City of Eoforwic (Yorvik in Danish), would have been a hive of activity as the good folk went about their lives drawn to the Mynster for the feast of All the Saints and the last market fair before winter. Little did they realize the great calamity about to enter their lives, as outside the gates was a wolf, Ivar the Boneless (son of Ragnar). Standing over seven foot tall, a great warrior and military tactician but also a tyrant, Ivar was the cruel and ruthless leader of the mycel heathern here, or Great Heathen Army.

Ivar, with his brothers Ubbe & Halfdan, along with their army arrived from Ireland years earlier. After landing in East Anglia in 865 AD they demanded and received Danegeld in the form of horses and supplies from King Edmund and the East Angles. The Vikings now had mobility by land and sea. Their target was Northumbria, and the domination of this northern kingdom with its superior river and road networks that linked Yorvic and Dublin to the Scandinavian homeland.

Northumbria in 866 was in a state of savage civil war. Osberht, the rightful King of Northumbria, had been deposed by Aella and a battle for control of Northumbria raged. Into this vacuum entered Ivar and his army. Chaos reigned as Ivar and the Viking Hordes began to launch attacks throughout Deira, looting, pillaging and killing in what could only have been a strategic plan by Ivar to weaken, subdue, cower, and splinter his enemies.

By March of 866 The rival Northumbrian Kings had reached a tacit agreement to stop their civil war to march on the Vikings and take back their kingdom. Although weakened by civil war, it also meant that the warriors of these Saxon lands were battle hardened, well trained and in such numbers that a full frontal assault against the Vikings at Yorvic was planned. For a short period it looked like Saxon success was theirs’ for the taking. But Ivar had arranged his defenses with all the cunning of an Alpha Wolf and the Saxons were defeated and King Alle would suffer the gruesome Ritual of the Blood Eagle.

Ivar the Boneless is as much a strategic as tactical game. While there will be pitched battles both players will have to make decisions as to when and where to fight, and how best to maximize your strengths, whether Viking or Saxon.