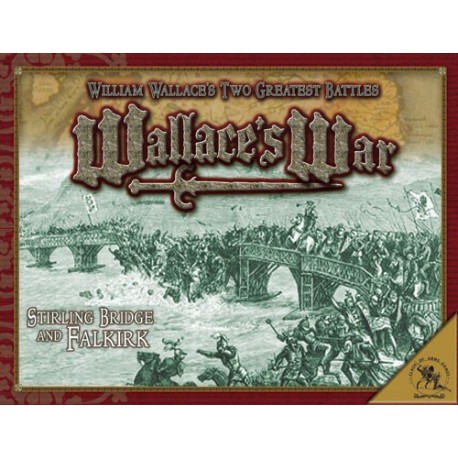 Centered in the Scottish War of Independence, Willam Wallace, the Braveheart of legend, faces the real task of defeating the English on the medieval battlefield.

His greatest victory; Stirling Bridge, 11 September 1297, pits him and the Scottish rebels against the larger, professional English army of the Earl of Surrey. Luring the English across the bridge, Wallace and Moray strike hard when only half of the English had crossed. Three scenarios explore the historical situation.

His greatest defeat; Falkirk, 22 July 1298, once again pits Wallace, now Guardian of Scotland, against the English led by Edward I (Longshenks) himself. Falkirk would be a great English victory but at the cost of much blood... and would herald the age of the longbow in English history. Based

on the Baron's War system, Wallace's War focuses on the command and weaponry of the medieval battlefield.

Game plays to completion in an evening. For 2 players or solitaire.