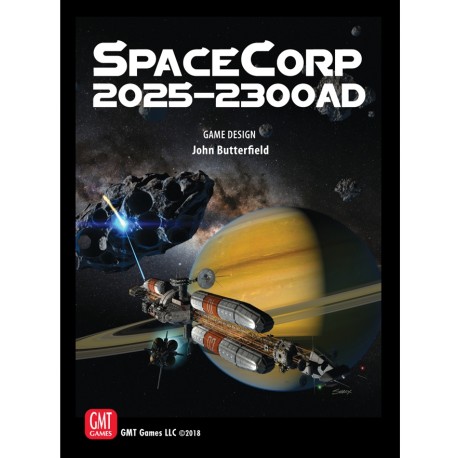 SpaceCorp: 2025-2300 AD is a fast-playing board game in which one to four players explore and develop outer space over three eras. Each player controls an Earth-based enterprise seeking profit by driving the expansion of humanity into the Solar System and beyond

In SpaceCorp you can …

Each of the three eras is played on a different board:

Players take turns playing cards to conduct actions with their teams and bases. Your turn consists of playing one or more cards of a single action type, with the option to augment the play with infrastructure, a time card or the attributes of a base.

For example, playing Move cards with a total value of 5 allows you to move a team from Earth to a Solar Lagrange Point. Other card plays allow a team on an asteroid or moon to explore there, or to build a base such as a spaceport, a refinery or a bio lab. You can also play cards to conduct research (draw new cards), production (gain profit from a site with resources), genetics (advance toward gaining genetic advantages for your teams), revelations (advance toward gaining technological breakthroughs), as well as special actions such as deep space probes and prototypes.

Some cards can be played as infrastructure, giving you permanent bonuses when conducting future actions.

During the game you earn profit from exploration discoveries, by conducting production at resource sites, and by completing contracts. For example, a contract in the Mariners era rewards the first player to build a base on Mars. The player with the most profit at the end of the game wins but there are many ways to get there. Will you focus on …

being the first to explore new horizons beyond known space?
developing genetics and tech  breakthroughs for spacefaring humans?
exploiting the resources of space?
beating other players to contract awards?
or will you go rogue, striking from your secure pirate bases?