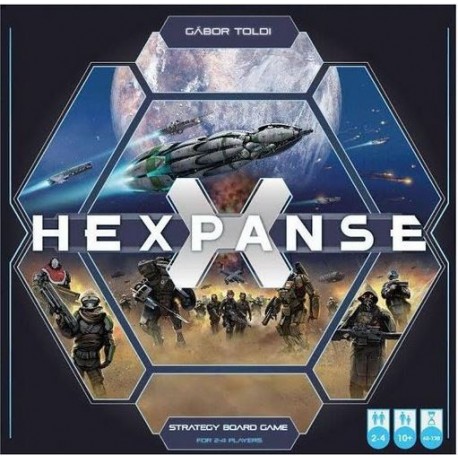 Are you ready for the battle, Commander?

In the not so distant future, there is war on the ruins of the shattered Interstellar Human empire. Four factions fight against each other for the supremacy: the militaristic Terran Empire, the vengeful high-tech Cyberian Collective, the wealthy and influential Union of the Trader Worlds and the freedom fighters of the Interstellar Nomads.

Hexpanse is a tactical game of planetary conquest, where 2-4 players take on the role of a Warlord commanding a unique faction through far galaxies. They must be quick to win this competitive pattern building strategy game and try to conquer a planet with their fearless army, special allies, tricky mercenary and actions.

All players fight to gain control of a single planet: they deploy their troops from their mother ship, mine the valuable hexilum to fund their army and use the unique abilities of their faction in powerful combinations to expand their territories and exterminate the enemy.

Victory can be achieved in two ways. Firstly, by deploying troops in a grand pattern, which represents gaining an unbreakable foothold on the planet. Secondly, by killing all rival Warlords, thus leaving their forces undirected.

Are you ready for the battle, Commander?