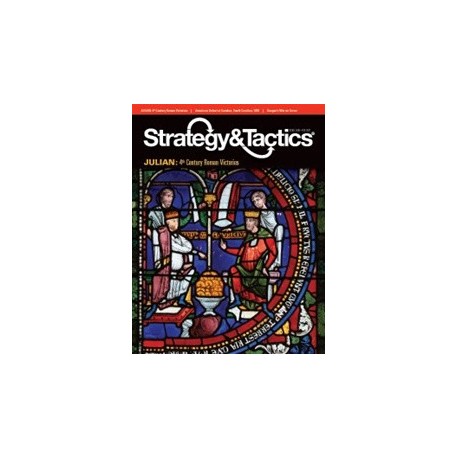 In this Strategy and Tactics magazine you will find historical articles and the wargame Julian 4th Century Roman Victories with die cut counters.

Julian, designed by Joseph Miranda, is a wargame of intermediate complexity simulating the situation across the Roman Empire in the 4th century AD. There are two opposing players: Roman and Barbarian. The Roman player represents the high command of a centralized empire; the Barbarian player represents the various chaotic forces working to destroy that empire. The Roman objective is to reconsolidate the threatened empire and secure its frontier regions to prevent further barbarian invasion. The Barbarian objective is to grab as much Roman territory as possible. The game systemis based on the one originally presented in our earlier S&T games: They Died With Their Boots On, Volumes 1 & 2.               The Barbarian side is divided into “forces,” each representing an independent people or coalition of tribes, such as the Goths. The Persians and Armenians, though commanded in the game by the barbarian player, are considered “civilized” forces (along with all Roman and rebel units).