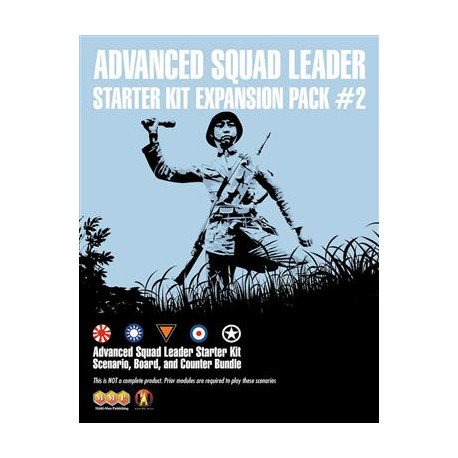 Advanced Squad Leader Starter Kit Expansion Pack #2 has been designed with all levels of Starter Kit play in mind and has something for everyone. It includes two new 8" x 22" geomorphic mapboards (k and l) and eight new scenarios set in locales such as China, Burma, Java, and New Guinea.

Expansion Pack #2 continues the introduction of the Japanese begun in ASL Starter Kit #4, this time with new opponents. Expansion Pack #2 also adds new rules to introduce players to the Chinese and to overlays. Ordnance and Vehicle Notes for the weapons used in the scenarios are also included.

However, unlike previous installments of ASL Starter Kit, Expansion Pack #2 does not come with everything you need to play!!!

Expansion Pack #2 assumes ownership of the core ASLSK modules Starter Kit #1, Starter Kit #2, Starter Kit #3, and Starter Kit #4. While Expansion Pack #2 includes counters for Chinese, Japanese, British, Filipino, and Dutch units, it relies upon these core Starter Kit modules to provide additional unit and information counters, thus giving players a low-cost method for introducing the Chinese and for expanding the range of combat in the Pacific Theater of Operations (PTO).

The most recent version of the Starter Kit rules may be downloaded from the MMP website by clicking this link.